Eastern Railway Company, and to take water from their land in the summer time in the same manner as last year. The Mayor strongly recommended the carrying out of Mr. Penny’s plan, and to press forward the fulfilment of the resolution passed last year. The water ought to be sufficient to supply the whole town, including the Long Fields and the Barrack Ground. Mr. Putland believed the present works would be sufficient if proper care were taken. The ultimate decision was to leave the matter in the hands of the Town Clerk.

Sheepwash Bridge. The Roads Committee having recommended the Council to take no part in the construction of a new Sheepwash Bridge on Bulverhythe Salts, but to leave it to the Commissioners of Sewers, Coun. Putland said the spot marked out for the new bridge was 150 feet eastward of the dilapidated old bridge, and was to be 18 feet wide. He would move that the Local Board undertake to construct the approaches, which would cost about £25 to £30. Ald. Clement seconded, and the motion was carried. At the next monthly meeting of the Council a petition was presented from 41 inhabitants of St. Leonards, setting forth that the widening of the Sheepwash Bridge would be a great advantage to the public; that the Commissioners of Levels did not feel justified in going to the necessary expense; and that the St Leonards Commissioners were not empowered to expend anything for the purpose. The petitioners therefore suggested that the extra expense be paid out of the borough fund. The Commissioners of Levels having expressed their willingness to give £130 towards making such a bridge and its approaches or to accept £100 if they built the bridge themselves, the Mayor thought it would be quite equitable for the expense to be charged to the borough fund. Coun. Putland said they had already decided to make the approaches, and as the road was the only level one out of the borough and the only one in the neighbourhood without a turnpike gate, it was thus one of great importance, whilst the present dilapidated bridge of 11 feet was one of the most awkward in Sussex. If the Council could not do anything he was prepared to try the getting up of a subscription. The Clerk said it would not be legal to do anything for the bridge under the Municipal Act, as the bridge belonged to the Commissioners of Levels. The Local Board could only make the approaches, unless it could be shown as a permanent improvement. The Mayor regarded it as one of those things in which they might stretch a point, as they did with the culvert for the Priory water, which he recollected was considered as not being strictly legal. It was ultimately resolved that the Local Board confine its operations to making the approaches. 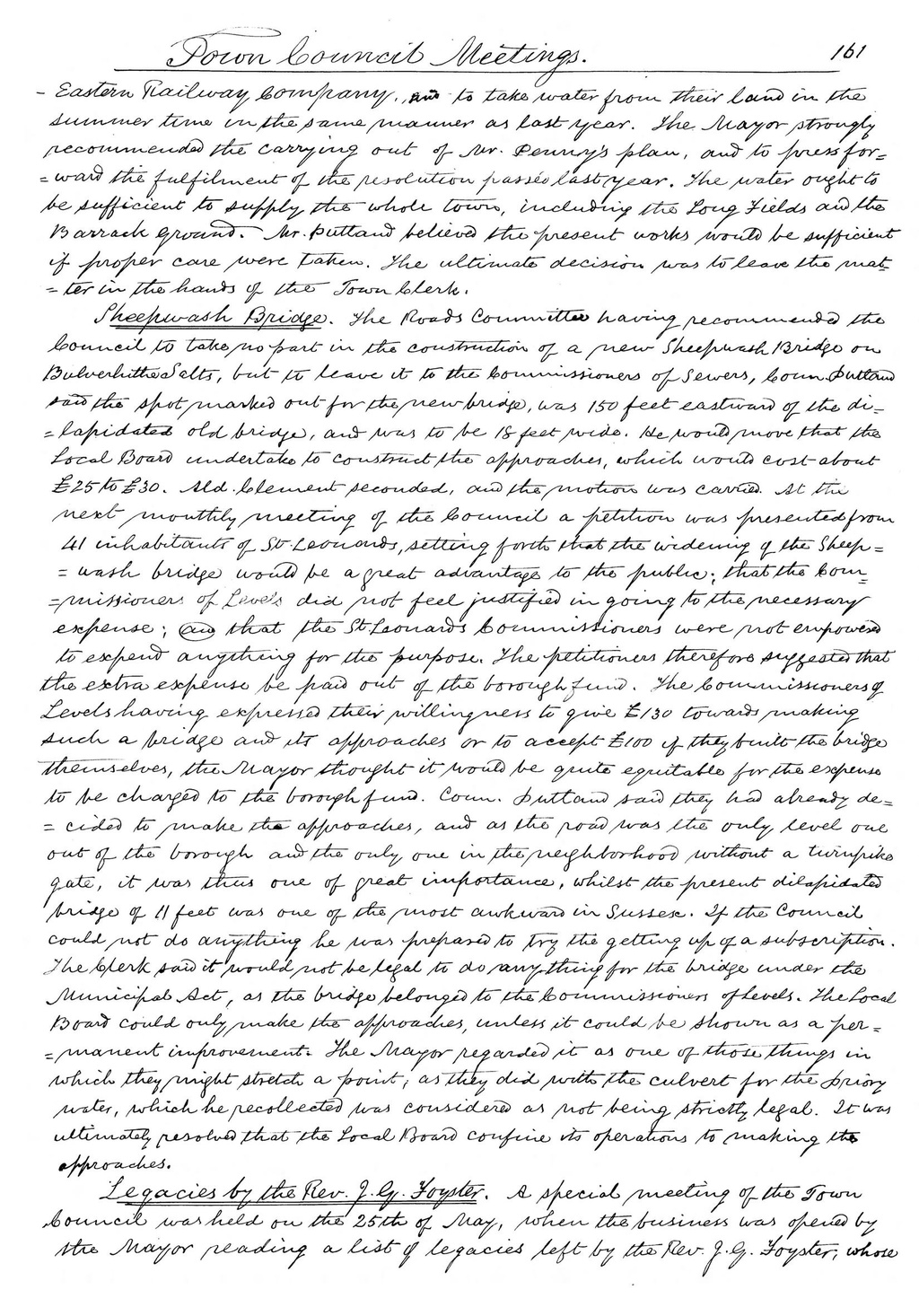