The Surveyor’s Claim. Acting on Committee’s recommendation, the Local Board voted £10 0s. 4d. to be paid instead of £27 9s. 4d. to Mr. Gant for extras, but the latter declined to take it.

Water Works. The Mayor said that the Countess of Waldegrave was most assiduous in promoting the purchase by the Local Board from her trustees the piece of land required for the waterworks near the Gas works, but the Gas company having purchased an additional 1½ acres from Miss Sayer could now furnish the Board with space necessary for engine-house and water shaft.

Petition to the Queen. The chief business at the meeting of May 4th was the consideration of the cemetery question. Coun. Bromley, in moving that the Council petition the Queen in Council for the powers of a Burial Board, said the present Burial Board had done nothing but spend the public money. Couns. (name missing) would vote against the motion, for the Council had already more work than it could do. Coun. Putland would have preferred a request coming either from the vestries or the inhabitants generally. St. Leonards and St. Mary Magdalen had agreed to the purchase of ground for themselves, and they already had the approval of the Government Inspector, but the Council would have to begin de novo. The ground they had in view would make more than a small cemetery as stated by Mr. Bromley, but would comprise 12 acres, whilst even ten acres had been sanctioned for the whole of the parishes. The two western parishes had already been entreated by the parishes of St. Michael’s and Holy Trinity as well. The Mayor (Mr. Ginner) thought it was highly desirable to have one cemetery for the whole borough. He was not wedded to one spot. As to the Magdalen land, it belonged to the two parishes of St. Clements and All Saints, and the western parishes should not be thinking of getting it for £100 an acre less than its worth. The Blacklands site would be dear at £150 an acre, it being only agricultural land, whilst the Magdalen Charity land was valuable as building land, and the trustees should get all they could for it, seeing that it belonged to the poor. He believed it possible to sell that land at a high price, and that it might be made subservient to a good and noble scheme by which education might be extended. I have italicised Mr. Ginner’s words as they were tantamount to a prediction now fully realised. Ald. Ticehurst said if the trustees of the Magdalen Charity attempted to sell that land for £200 an acre, he, as a St. Clement’s parishioner should decidedly oppose it. He had just heard a gentleman say he would give £300 an acre for it. Ald. Clement said, even £200 an acre for a cemetery was too much. There was land in the neighbourhood letting for ten or twelve shillings an acre; such land ought to be sold for £50 or £60 an acre. Bromley’s motion was negatived by a majority of one – 11 against 12.

The Water Supply. The Committee recommended not to meet the directors of the Gas Company at present, but to apply to the South-- 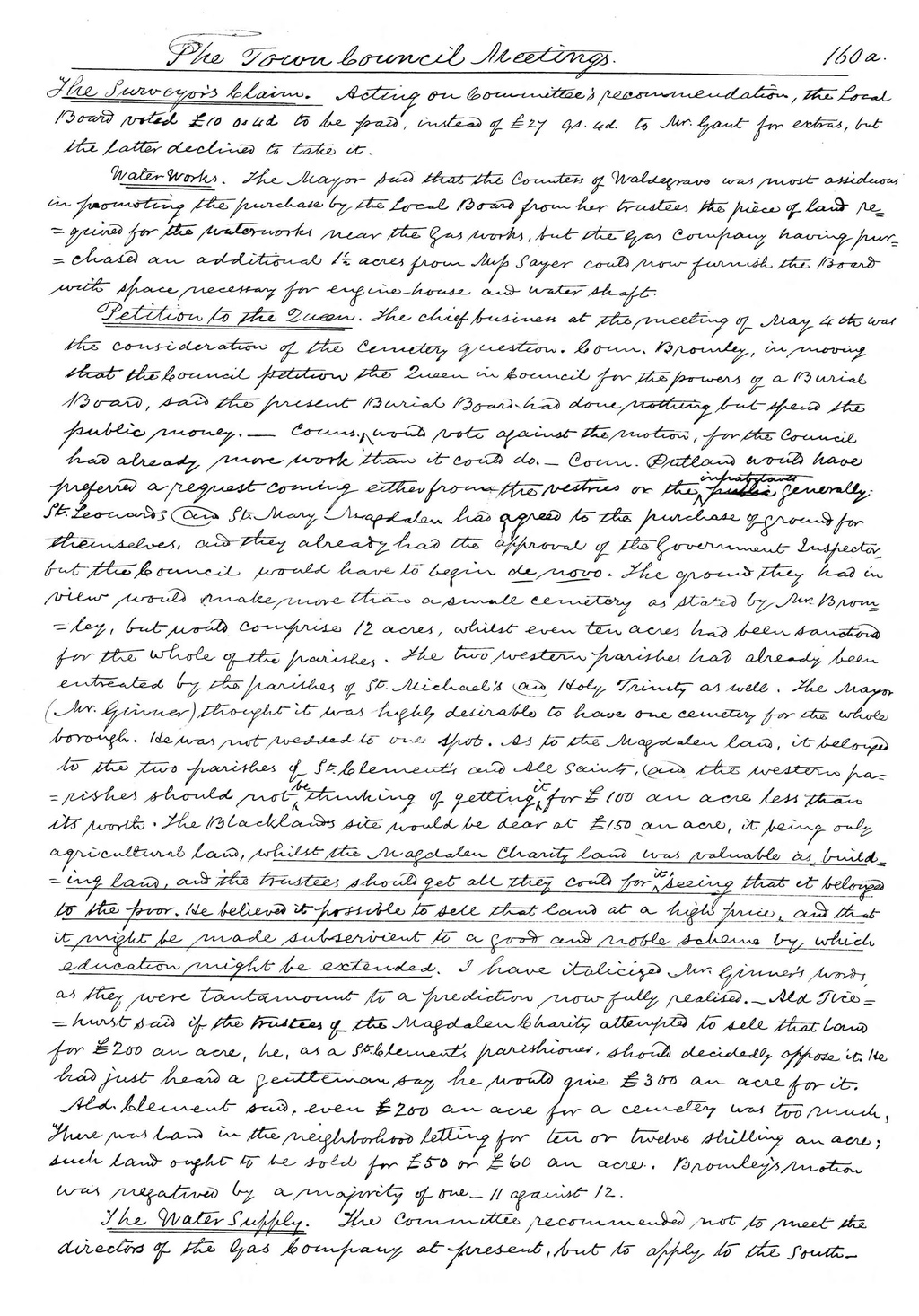