drainage was still a subject of negotiation.

Surveyor’s Charges. Coun. Ross said a bill sent in by the surveyor for certain extras was thought to be out of the regular course. The Surveyor explained the charges to be principally for time and labour in connection with the drainage plans in consequence of the Board having called in the services of Mr. Braithwaite to test those plans after they had been passed by the Government Board. Coun. Ross thought the items should be read, to which, Mr. Gant strongly objected, as he had never heard a bill read in public before. Ald. Clift had also never seen such a bill presented before. The Mayor thought that by Mr. Gant objecting to the reading of his bill, he practically withdrew it; but if not so, it was open to the inspection of the whole Board. Coun. Putland considered the charges to be for services included in the regular duties of the Surveyor. Something wanted to be set right between Mr. Gant and the Board. Coun. Ross moved that the bill be read. Mr. Gant still objected, stating that during his two years of office a bill had never before been read in public. Ald. Clift and Coun. Bromley had both heard bills openly read. Yes! said the Clerk “You had a brush with me once”. [Laughter]. The bill of extras was then read, amounting to £27 9s. 4d. some part of which Coun. Ross thought should have been charged to Mr. Putland. The Mayor thought that Mr. Gant’s six days in London and some other expenses of his attendance on Mr. Braithwaite should be allowed, but it was urged that his attendance at committee meetings &c. was a part of his regular duties. Bill referred to Finance Committee.

Waterworks Manager. The committee reported that in consequence of £126 9s. 7d. deficiency in the waterworks manager and collector’s accounts they had found it necessary to suspend him, and recommended Mr. Wm. Phillips to collect the remainder of the rate for that quarter. The Manager, who was present at the meeting said he had found the duties too heavy for him. He had, however, a claim against the Board which would reduce his deficiency to £61 18s. 7d. Mr. Phillips was temporarily appointed. Mr. Harvey having obtained permission to address the Board, said he had been three weeks without water, and wanted to know why he should be taxed for what he did not get. The Mayor suggested that Harvey was sharing with others the inconvenience of frozen-up pipes. Mr. Harvey was not satisfied, and thought it was due more to bad management than frost; he, however, had made his complaint, and expected it to be attended to; for, in the multitude of counsellors(sic) there should be wisdom. Coun. T. B. Williams was wise enough to tell Mr. Harvey the collector would call about the usual time. [Laughter].

Mr. Troup’s Generosity (!) At the meeting on April 5th a letter was received from Mr. Troup in which the writer stated it to be his intention after the payment of liabilities which should be cleared by the sale of the leases marked A & B, to give £5,000 to charities in Hastings and London, as a thank-offering, &c.

A Borough rate at 4d. was ordered to be paid out of the poor-rate, that being the only course that was legal – so said the Clerk.- 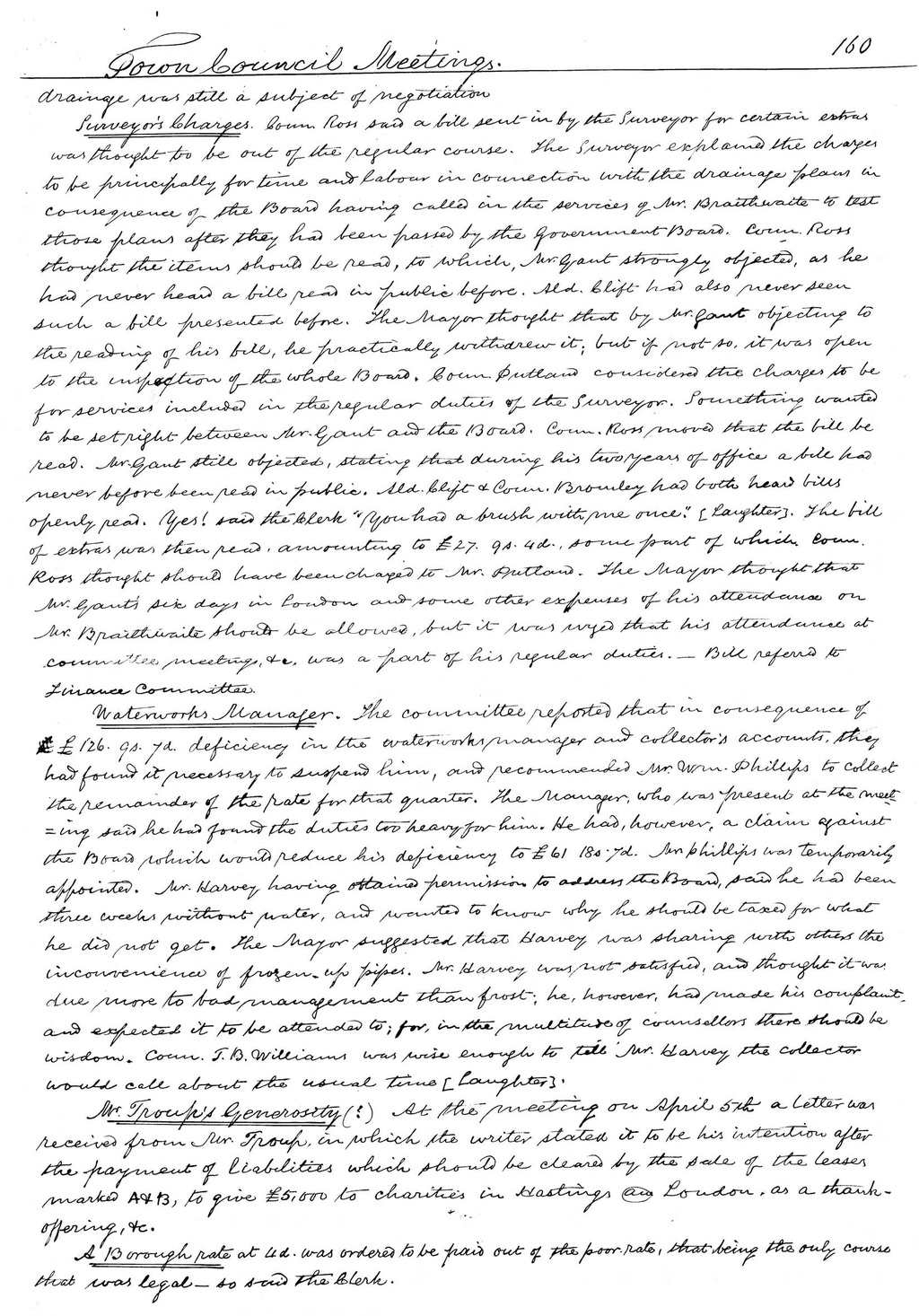