Drainage Loan. At the Council meeting on the 5th of January, after passing a district rate at 6d., the “Law-Life” office having offered a loan for the drainage at 5 per cent, Ald. Clement moved that it be not entertained, remarking that he knew money could not be had just then at a less interest, but he could not agree to borrow at that rate for 30 years. Wait till the war was over, and loans would come to 3½ per cent. Ald. Scrivens in seconding, asked would they consent to borrow at 5 per cent, and be laughed at by St. Leonards who had borrowed at 4 per cent? Clements’s motion was carried.

Dividing the Contract. Coun. Putland, whose former proposition for dividing the drainage into three was negatived, now proposed that it should be divided into two, so as to give small capitalists an opportunity to compete. He argued that Mr. Braithwaite had added £3,000 to Mr. Gant’s original estimate, and his (Mr. Putland’s) plan would reduce Mr. Gant’s estimate by £2,000, thereby saving £5,000. This, he contended, would be to encourage competition, whereas Mr. Austen’s recommendation to invite tenders for the whole would limit competition and create a monopoly. [No, no!]. Coun. Bromley could not see the question as Mr. Putland did, and Ald. Scrivens objected to the division for the same reasons as those before stated, and he demurred to the bad precedent of introducing the same question in another form. The proposition was then again negatived.

Enclosure of Ground. At the meeting on Feb. 2nd, leave was granted to Mr. Goldsmith, and Mr. Roe to enclose a small portion of stone beach in front of Denmark place on a yearly lease at 10s. each, and to have no other enclosure or erection than a dwarf wall two feet high, with an open iron railing on the top. This was for the small gardens in front of the houses.

Capstans. Resolved that the capstans on Eversfield parade, the property of H. W. Tree’s executors, be purchased at 25 per cent below valuation, and moved eastward.

Feeling against the Surveyor. Coun. Putland moved the adoption of the Committee’s report which saw no reason for an increase in the Surveyor’s salary. He also moved that Mr. Braithwaite’s bill of £110 stand over, although he admitted that there was plenty of money in hand to pay it.

Gensing Street ordered to be called South Street, the latter having become its more popular name, and thus avoiding confusion of Gensing street and Gensing road.

Premises set Back. Refusal given to Mr. Boykett Breeds application for £25, if he should set his warehouse back in a line with his new premises in George street, it being contended that if he pulled down the premises he would be compelled to set back without compensation.

Criminal Prosecutions. At the meeting on March 2nd, the Clerk reported the expense of criminal prosecutions at the Midsummer Sessions of 1854 to have been £39; Michaelmas Sessions £26; and maintenance of prisoners for the half year to September £14.

Finance. At the same meeting the committee recommended among other payments, Mr. Braithwaite’s bill of £110 and stated that the £13,000 loan for- 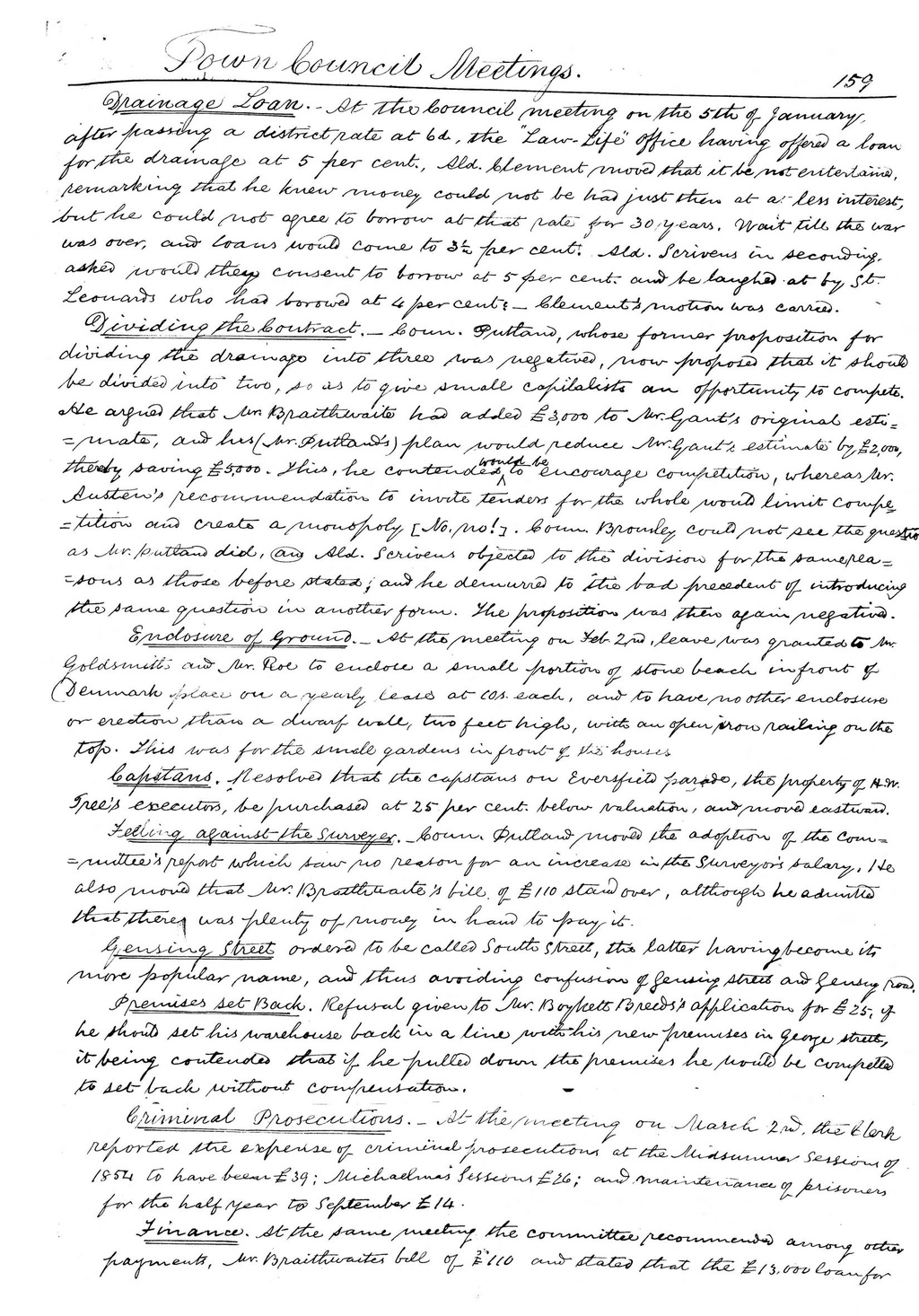