Historical Hastings Wiki
You have a new message (last change).

Church of St Thomas of Canterbury and English Martyrs

A Roman Catholic church situated on Magdalen Road. Construction started on 30 March 1888, although the foundation stone was laid on 21 July of that year. Builder Edmund Boniface executed Charles Alban Buckler's design, and the new Church of St Thomas of Canterbury and English Martyrs opened to the public on 6 July 1889. Between 1908 and 1911, Nathaniel Westlake (1833-1921) painted the interior with a range of vivid murals depicting scenes from the Bible. Much of this was stencilled, but the work is unusually extensive and it is unusual for such designs to have survived in churches.[1] This work blocked one of the original trefoil windows above the chancel arch.

A Roman Catholic community in St Leonard's began in 1834 with the purchase of land by a Catholic priest, John Jones, using a legacy from Barbara, Lady Stanley of Puddington. In 1848 a recently founded teaching order of nuns, the Society of the Holy Child Jesus under Mother Connelly, was installed and a church begun. 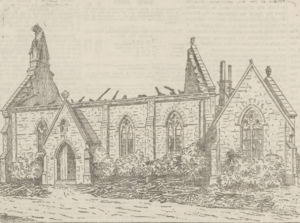 A dispute between the convent and parish over ownership of the church led to the parish moving to a site further up Magdalen Road. The foundation stone of the first church of St Thomas of Canterbury was laid on 21 August 1865 and opened on 24 May 1866, designed by Charles Alban Buckler. Unfortunately, this building was completely destroyed by fire on 3rd January 1887 with only the charred walls remaining. The church had been profusely decorated for the feast of the patron saint and had appeared secure, both to the Rev. Father Foy, and the local policeman, P. C. Jenner who had tried the door several times upon his beat, his final passing of the premises being at 06:15. By 06:45, unusual flickering in the windows was noticed as far away as Halton, and the constable upon returning past the church at around 07:15 finally discovered the fire. He immediately proceeded to the priest's house at the rear of the church and raised the alarm. In spite of the best efforts of both the Steam Fire Brigade and two sections of the Borough Brigade, it proved impossible to save the building. The seat of the fire appeared to be be near the altar and the high winds served to fan the flames. All the combined brigades were able to achieve through their work was to prevent the fire from spreading and by 9am the roof and floor of the church had collapsed. Once the flames were dying down, entry was forced into the sacristry which appeared to have escaped the flames and fortunately the vestments and sacramental plate were recovered, albeit in a water-logged state. Virtually everything else within the church was destroyed with the only surviving items after the fire was finally quenched was the Saint's relics which had been placed in sealed boxes buried under the altar stone. [2].

Weather damage during 1940 necessitated repairs in the 1950s; this being carried out by the local firm Pettit Bros., but by 1981 the murals' condition was so poor that whitewashing over them appeared to be the only course of action. Enough money was raised for a full restoration to take place; artist Charles Camm being commissioned to carry this out, including the stencilling work.[1] Unusually the chancel faces west as opposed to the normal east-facing layouts found in churches. Grade II Listed (Historic England listing 1391831)